What Can Your Program Do to Help Eradicate HIV/AIDS? 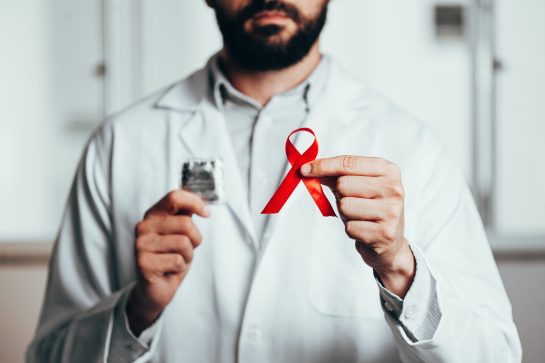 With another World AIDS Day behind us, programs within the United States and across the globe, are still working tirelessly to stop the spread of HIV/AIDS. As one of the biggest health crises in the world, organizations can improve their services by reducing stigma surrounding HIV diagnosis and approaching treatment through a whole person care approach.

HIV IN THE UNITED STATES

Learning that you are HIV-positive can be an incredibly difficult experience. Not only is the disease potentially life-threatening, but a strong negative stigma still exists aroundthose who are diagnosed. Individuals can face shame, marginalization, and outright rejection following their prognosis, and this social isolation can create additional barriers for accessing resources. According to UNAIDS, only 67% of all people diagnosed with HIV have access to the essential medication for their survival1.

Despite medical and policy advances, the US is still the leading developed nation in HIV-positive patients2, with over one million Americans currently diagnosed. Due to the politicized nature of this disease, policies and legislation aimed at mitigating the spread of HIV have been historically difficult to institute. For instance, while studies in the UK show that programs allowing needle-exchange services for drug users significantly decrease HIV infection, such initiatives are still not federally funded in the US. At 15%, the US rate of HIV infection among drug users is more than five times that of the UK.

WHO IS MOST AT RISK?

People who inject drugs are not the only population at risk.. Men who have sex with men constitute over 70% of new diagnoses in the US, and this rate is disproportionately carried by Black men.  Other high-risk groups include Black and Latino individuals, youth ages 13-24, people living in the Southern region of the US, and transgender women3. Strikingly, underserved communities in large cities such as Washington, D.C.  and New York City have rates of HIV comparable to Sub-Saharan Africa (the region with the largest percentage of HIV cases per capita in the world).

These at-risk communities are also historically the most disenfranchised, which adds additional barriers to accessing treatment. LGBTQ+ individuals and racial minorities experience food insecurity, homelessness, and poverty at significantly higher rates than those outside of these communities, and consequently are more likely to contract HIV.

Interestingly, a study in 2014 found that while most chronic diseases fall on a socio-economic and health gradient, HIV almost exclusively affects those living at or below the poverty line4. This finding suggests that HIV is inseparably enmeshed with other social issues, and as such needs a whole person care approach. Large-scale solutions for ending the spread of HIV are best achieved through coordination between all community leaders and programs.

THE FUTURE OF HIV TREATMENT AND PREVENTION

Studies show that one of the most effective ways to mitigate HIV spread is through mass media campaigns5. Educational efforts on preventative measures such as condom use, medications like PrEP, and sterile needle injection can significantly decrease the risk of contracting HIV. Individuals who are experiencing poverty, food insecurity, and illiteracy are typically the most uninformed about these preventative measures6, which means that awareness campaigns can quickly improve the information-asymmetry in these communities.

There is also good news for those who have already contracted HIV: when diagnosed early enough, medication can decrease levels of the virus to “undetectable,” meaning that transmission from the infected person to another is essentially impossible7. However, reaching such status is only possible when individuals 1) know their HIV status, 2) can gain access to medication and resources, and 3) are able to consistently receive treatment.

For programs to best help patients overcome these barriers, they should focus on efforts such as free and regular STD testing, medication reminders, and case management tools. Communities must work on eliminating the stigma that comes with HIV—when shame surrounding regular STD testing, safe-sex practices, and safer drug use is reduced, individuals are more likely to take a proactive approach to their health. Those who are HIV-positive deserve to continue participating in their community without fear of rejection or ostracization.

In addition to the above measures, individuals at-risk for and living with HIV are best served when behavioral health is at the forefront of care. Substance abuse and mental health status is directly correlated with unsafe sexual and drug-use practices, which in turn lead to increased risk of HIV8. Among those who have contracted the virus, the majority report significantly more strain on their mental health. Serving HIV-positive populations means addressing and supporting mental and behavioral health.

While the road to eradicating HIV is long, it is possible. Education is crucial for reducing risk of transmission, alongside decreasing the social stigma associated with the disease. Ultimately, understanding the systemic barriers for communities in poverty is the first step to implementing long-term solutions.

Social Workers and the Coronavirus Pandemic