How Can We Support Ukrainian Refugees? 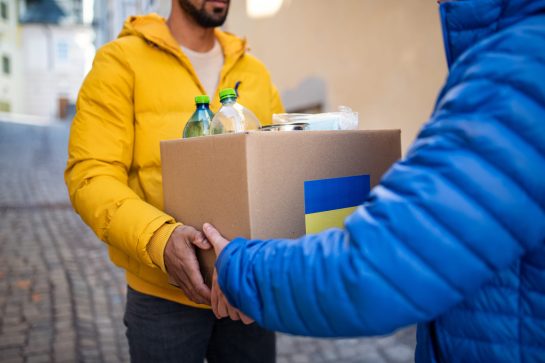 The invasion of Ukraine has displaced over 5.3 million refugees and counting. Now is the time to aid Ukrainians fleeing political violence—but what exactly can you do to help? Check out our three ideas on ways to make a difference today.

On February 24, 2022, Russia began a historic and destructive invasion of Ukraine. Since the start of this conflict, more than 5.3 million refugees have fled Ukraine, kickstarting the largest refugee crisis in Europe since World War II.

Most of these refugees have found shelter in Poland, Hungary, and other neighboring countries, but their difficulties only continue from there. These refugees are urgently in need of support, protection, and other humanitarian needs.

The scale of this refugee crisis can leave some people feeling overwhelmed about how to even get started. Thankfully, there’s a lot we can do—even from within our own communities.

There’s no way around it: being a refugee is extremely difficult.

According to the United Nations High Commissioner for Refugees (UNHCR), a refugee is “someone who has been forced to flee his or her country because of persecution, war or violence. A refugee has a well-founded fear of persecution for reasons of race, religion, nationality, political opinion, or membership in a particular social group. Most likely, they cannot return home or are afraid to do so.”

Refugees face a myriad of obstacles from the moment they decide to flee to long after they relocate, including:

Each of these aspects can be challenging all on its own, but when faced simultaneously, they can seem insurmountable. It’s critical to the livelihood of these vulnerable groups that health and human-service organizations such as refugee resettlement agencies work together to help alleviate these obstacles refugees face.

The Toll of Fleeing Political Violence

Part of what makes the Ukrainian refugee crisis so devastating is that it stems from political violence. The toll of fleeing violence is often deeper and longer-lasting than displacement from a random event that dissipates, such as a natural disaster.

For instance, the ongoing warfare makes fleeing even more dangerous. For those who remain at home, they must halt any efforts to re-establish their communities and instead need to funnel all resources into fighting in the conflict.

Additionally, many, if not most, of the current Ukrainian refugees have family and friends who are still on the frontlines. Even after arriving to a safer place, these refugees must still grapple with the uncertainty of their loved ones fighting in the conflict. Many must also mourn those they’ve already lost.

How Can We Support Ukrainian Refugees?

When considering the uniquely difficult situation millions of Ukrainian refugees are currently in, it can be easy to feel discouraged. How can we make a difference in the lives of these refugees, especially when most of them are thousands of miles across the sea?

Thankfully, the answer to this question is a lot more accessible than people may think. No matter where you’re at, there are three ways you can support Ukrainian refugees right now:

If there is one truth in health and human-service organizations, it’s that they know how to make the most of the resources they have. Directly donating to organizations that help refugees is one of the best ways to make an impactful difference today.

Take the Kentucky Office For Refugees, for example. It helps thousands of refugees each year acclimate to their new communities while receiving the critical, whole-person care they need.

These agencies are only a few of the many places that can use your donation. Many people have shown help by booking hotels and Airbnbs in high-concentration refugee areas such as Poland. Others focus on alleviating food insecurity by donating to the UN’s World Food Program.

Find Local Organizations to Volunteer With

Donations aren’t the only way you can show support for Ukrainian refugees. Time can be just as valuable, as local organizations almost always could use more volunteer support.

The US Office for Refugee Resettlement (ORR) has a useful tool for identifying refugee organizations by state and city. If there is not a refugee-specific program near you, consider reaching out to a local food bank or homeless shelter. As care coordination becomes more and more common among health and human services, these social programs may have additional insight into how to help local refugees in your community.

Help Prepare Your Community for Refugees

A third way to help during this crisis is to begin preparing your community to receive Ukrainian refugees.

On April 21, 2022, the United States announced a new, streamlined process for quickly resettling 100,000 Ukrainian refugees into the country. This is no small announcement, particularly considering that the total number of refugees resettled in 2021 was less than 12,000 for the entire year.

Understanding that resettlement in the United States is projected to increase nearly tenfold in the coming months, communities should be preparing now to help ease the process.

In addition to volunteering directly with resettlement agencies, individuals can do their part to prepare their community by showing support for refugee resettlement. There is still unfortunately some stigma surrounding refugees, though it is primarily motivated by fear and misunderstanding. By informing your neighbors, friends, and family about the benefits of refugee resettlement, you can help end the stigma and make your community safer for refugees.